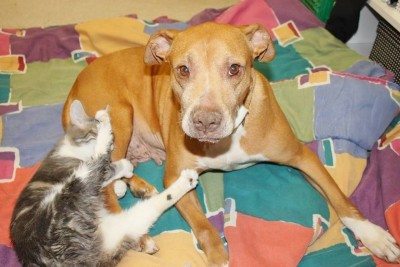 Introducing Your New Cat to Your Other Pets

It’s important to have realistic expectations when introducing a new pet to a resident pet. Some cats are more social than other cats. For example, an eight-year-old cat that has never been around other animals may never learn to share her territory (and her people) with other pets in the household. However, an eight-week-old kitten separated from her mom and litter- mates for the first time, might prefer to have a cat or dog companion. Cats are territorial and need to be introduced to other animals very slowly in order to give them time to get used to each other before there is a face-to-face confrontation. Slow introductions  help prevent fear- ful and aggressive problems from developing. PLEASE NOTE: When you introduce pets to each other, one of them may send “play” signals that can be misinterpreted by the other pet. If those signals are interpreted as aggression by one animal, then you should handle the situa- tion as “aggressive.”

Confine your new cat to one medium-sized room with her litter box, food, water and a bed.

Feed your resident pets and the newcomer on each side of the door to this room. This will help all of them to associate something enjoyable (eating!) with each other’s smells. Don’t put the food so close to the door that the animals are too upset by each other’s presence to eat. Gradually move the dishes closer to the door until

your pets can eat calmly, directly on either side of the door. Next, use two doorstops to prop open the door just enough to allow the animals to see each other, and repeat the whole process.

Switch sleeping blankets or beds between your new cat and your resident animals so they have a chance to become accustomed to each other’s scent. Rub a towel on one animal and put it underneath the food dish of another animal. You should do this with each animal in the house.

Once your new cat is using her litter box and eating regularly while confined, let her have free time in the house while confining your other animals to the new cat’s room. This switch provides another way for the animals to experience each other’s scents without a face-to-face meeting. It also allows the newcomer to become familiar with her new surroundings without being frightened by the other animals.

Avoid any interactions between your pets that result in either fearful or aggressive behavior. If these responses are allowed to become a habit, they can be difficult to change. It’s better to introduce your pets to each other so gradually that neither animal becomes afraid or aggressive. You can expect mild forms of these behaviors, but don’t give them the opportunity to intensify. If either animal becomes fearful or aggressive, separate them, and start over with the introduction process in a series of very small, gradual steps, as outlined above.

If one of your pets has a medical problem or is injured, this could stall the introduction process. Check with your veterinarian to be sure that all of your pets are healthy. You’ll also want to have at least one litter box per cat, and you’ll probably need to clean all of the litter boxes more frequently. Make sure that none of the cats are being “ambushed” by another while trying to use the litter box. Try to keep your resident pets’ schedule as close as possible to what it was before the newcomer’s appearance. Cats can make lots of noise, pull each other’s hair, and roll around quite dramatically without either cat being injured. If small spats do occur between your cats, you shouldn’t attempt to intervene directly to separate the cats. Instead, make a loud noise, throw a pillow, or use a squirt bottle with water and vinegar to separate the cats. Give them a chance to calm down before re-introducing them to each other. Be sure each cat has a safe hiding place.

Dogs can kill a cat very easily, even if they’re only playing. All it takes is one shake and the cat’s neck can break. Some dogs have such a high prey drive they should never be left alone with a cat. Dogs usually want to chase and play with cats, and cats usually become afraid and defensive. Use the techniques described above to begin introducing your new cat to your resident dog. In addition:

If your dog doesn’t already know the commands “sit,” “down,” “come” and “stay,” you should begin working on them. Small pieces of food will increase your dog’s motivation to perform, which will be necessary in the pres- ence of such a strong distraction as a new cat. Even if your dog already knows these commands, work with obey- ing commands in return for a tidbit.

After your new cat and resident dog have become comfortable eating on opposite sides of the door, and have been exposed to each other’s scents as described above, you can attempt a face-to-face introduction  in a con- trolled manner. Put your dog’s leash on, and using treats, have him either sit or lie down and stay. Have another family member or friend enter the room and quietly sit down next to your new cat, but don’t have them physi- cally restrain her. Have this person offer your cat some special pieces of food or catnip. At first, the cat and the dog should be on opposite sides of the room. Lots of short visits are better than a few long visits. Don’t drag out the visit so long that the dog becomes uncontrollable. Repeat this step several times until both the cat and dog are tolerating each other’s presence without fear, aggression or other undesirable behavior.

Next, allow your cat freedom to explore your dog at her own pace, with the dog still on-leash and in a “down- stay.” Meanwhile, keep giving your dog treats and praise for his calm behavior. If your dog gets up from his “stay” position, he should be repositioned with a treat lure, and praised and rewarded for obeying the “stay” command. If your cat runs away or becomes aggressive, you’re progressing too fast. Go back to the previous introduction steps.

Although your dog must be taught that chasing or being rough with your cat is unacceptable behavior, he must also be taught how to behave appropriately, and be rewarded for doing so, such as sitting, coming when called, or lying down in return for a treat. If your dog is always punished when your cat is around, and never has “good things” happen in the cat’s presence, your dog may redirect aggression toward the cat.

Directly Supervise All Interactions Between Your Dog and Cat

You may want to keep your dog on-leash and with you whenever your cat is free in the house during the intro- duction process. Be sure that your cat has an escape route and a place to hide. Keep your dog and cat separated when you aren’t home until you’re certain your cat will be safe.

Dogs like to eat cat food. You should keep the cat food out of your dog’s reach (in a closet or on a high shelf ). Eating cat feces is also a relatively common behavior in dogs. Although there are no health hazards to your dog, it’s probably distasteful to you. It’s also upsetting to your cat to have such an important object “invaded.” Unfortu- nately, attempts to keep your dog out of the litter box by “booby trapping” it will also keep your cat away as well. Punishment after the fact will not change your dog’s behavior. The best solution is to place the litter box where your dog can’t access it, for example: behind a baby gate; in a closet with the door anchored open from both sides and just wide enough for your cat; or inside a tall, topless cardboard box with easy access for your cat.

A Word About Kittens and Puppies

Because they’re so much smaller, kittens are in more danger of being injured, of being killed by a young energetic dog, or by a predatory dog. A kitten will need to be kept separate from an especially energetic dog until she is fully-grown, and even then she should never be left alone with the dog. Usually, a well-socialized cat will be able to keep a puppy in its place, but some cats don’t have enough confidence to do this. If you have an especially shy cat, you might need to keep her separated from your puppy until he matures enough to have more self-control.

When to Get Help

If introductions don’t go smoothly, seek professional help immediately (see our handout: Finding Help for Serious Behavior Problems). Animals can be severely injured in fights, and the longer the problem continues, the harder it can be to resolve. Conflicts between pets in the same family can often be resolved with professional help. Punishment won’t work, though, and could make things worse.