A Normal Trait that is as Flexible as it is Manageable

This page is designed to help demystify the common trait of dog-dog aggression. Dog aggression

shows up in numerous breeds, and it’s generally “no big deal”…unless you deny it, misunderstand

it or exploit it. Like so many dog owners, we expect that our dogs have the potential to show

some degree of dog aggression in select situations. Our job as responsible stewards is to keep our

limits. At the same time, we work to improve the tolerance of each dog through appropriate

socializing opportunities. Because dog aggression is not a “one size fits all” trait, outlined below 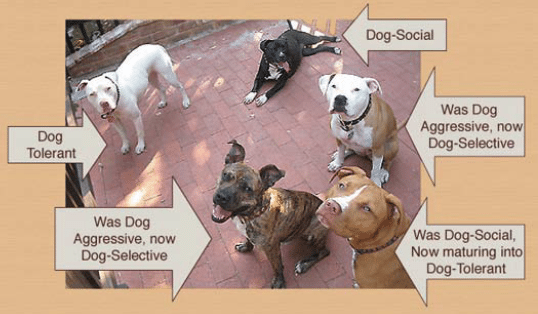 A dog that truly enjoys the company of other dogs, including housemate dogs. Very

easy going; Forgives even the rudest dog manners. Dog-social dogs include most

puppies and a percentage of socially mature (14 months and older) dogs. Some have

called these dogs ‘cold’ pit bulls. Example: Beanie is a mature female who is social and relaxed

around all dogs. In contrast, the immature red dog, Penny, in the bottom right of the photo is not

as dog-social as when she was a puppy. She’s very typical in that she’s losing her puppy-like

tolerance as she matures. A bad accidental fight could shift Penny far away from her dog social

Typically non-reactive on leash and either indifferent or friendly to other dogs. Is

May not ‘love’ dogs that he doesn’t know, but has decent tolerance for rude

Example: Honky Tonk is quite fine with other dogs but doesn’t seek them out like a puppy

Has dog friends but is more selective. May dislike certain ‘types’ of dogs and/or is

easily offended by rude dog manners. Can be described as ‘bitchy.’ Likes to dictate

the rules during dog-play, and needs to be reminded to use good manners during

play. Can succeed with housemate dogs with supervision. Example: Sally was ‘Dog Aggressive’

and willing to fight when she came to us, but with clear direction and supervised socializing

opportunities, is not likely to show this trait unless she’s pushed passed her limits.

Has a very limited number of dog friends; sometimes, no dog friends. May be

opportunistically leash reactive with a weak handler and/or no training. May have a

short fuse during play, even with dogs that it knows. Needs heavy supervision during

play and a good leader when out on leash. Many live successfully with housemate dogs (usually

opposite sex) with proper supervision and safe management protocol. Example: Taz was labeled

‘Dog Aggressive’ when we first met him because he was very quick to tell dogs off. His tolerance

levels have increased dramatically, thanks to lots of socializing opps and good direction from his

caretakers. We watched him shift to Dog Selective personality and in his new home, he’s actually

Note: All the dogs in this photo were introduced slowly and enjoy each other’s company under

supervision. While none of the dogs illustrated are ‘Dog Aggressive,’ like any breed of dog, they

may certainly act aggressively towards other dogs if they’re mismanaged, provoked or otherwise

set up to fail. Pit bulls that we would label as Dog Aggressive can make fantastic pets with the

homes each year. In some cases, the Dog Aggressive pit bulls act as our best breed ambassadors

at public events. As with all dogs, the key to success is a dog with a correct people-soft

temperament and a responsible owner.

The Bell Curve of Dog Aggression:

Dog tolerance levels are flexible and are determined by environmental factors (handler influence,

training and socializing efforts) as much as they are determined by genetics. Dog Social dogs can

become less social as they come into their maturity, and Dog Aggressive dogs can become much

more tolerant with good direction and proper socialization. In our experience, with the combined

‘terrier’ personalities fall comfortably in the middle spectrum of this bell curve.